Track Racing for a Mountain Biker? 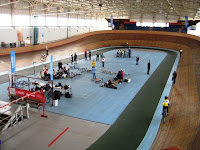 Jumping at the chance for my son Dan and me to ride at the Calshot velodrome, we headed down to Southampton to join up with Sutton Cycling Club. Dan was with a group for experienced tack riders whilst I joined the beginners as it was my first time.

Riding a fixed wheel track bike with no brakes was a new experience that I quickly picked up. The most difficult part was riding in close proximity to others, which is usually avoided when mountain biking. The steep sides of the track are at a 45º slope going up about 20 feet high. It appears quite scary when looking down the slope from the spectator gallery, but when riding round the top it’s really exhilarating. I treated it as a massive berm. 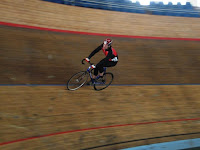 Completing a ‘flying lap’ Dan managed 11.41s where I just pipped him with 11.34s. It won’t be long before he’s overtaking me on the sprints.
The adults had a 30 lap race. I’d never ridden in a close proximity race before, let alone on a track. The 7 of us set off on a rolling start where the first 10 laps were a bit messy as we rotated round taking in turns for the lead. The pace was moderate where I knew I could go faster. As soon as I reached the front of the group I applied the pressure stepping up the pace quite significantly. It wasn’t long before I could see the tail end of the group where I then lapped about 3 of them. Conscious that someone was coming up onto my tail, I tried to up the pace a bit more but my legs were beginning to feel the pressure. Had I broken away too early? He caught up with me with about 10 laps to go taking advantage of my slipstream. As I pulled up the bank he reluctantly took the lead so I could rest behind him for a lap or two. With the final lap in sight I applied extra power to ride up the bank and accelerate past him. Tucking myself in front, I hugged the black line round the final bend where he was now trying to overtake me on the outside. A final burst of power saw me take the finish line just ahead, giving me 1st place. 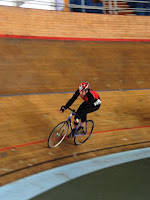 It was a fantastic race to ride and apparently also to watch. I’d never come first before in a race and was delighted to receive a medal to add to my very small collection.
The adrenaline was certainly buzzing during the race and it was a great day out. There’s a lot more in the way of tactics and ride positioning with track racing, however I also get a buzz out of a fast flowing single track descent. Both disciplines require a very different skill set, which in some ways may compliment each other.
Posted by Richard Sterry at 13:24 No comments:

Set2Rise - From Muddy to Magnificent

Avoiding the Bank Holiday traffic on the A303 we reached Erlstroke near Devizes in plenty of time.
With virtually a free choice in the field, we set up our camp on the side of the Set2Rise track in preparation for night's ride. This was the first proper outing for the new Redhill Cycling Club gazebo, which proved to be an invaluable shelter for the night. Downing a late pasta lunch then grabbing an hour's kip were the next priorities. I woke up mid afternoon to find the campsite a mass of tents and bikes where excitement filled the air. With heavy rain earlier in the day and a couple of downpours during the afternoon, the weather was not on our side. Riders returned from their practice laps covered in mud, which didn't bode well. Selecting intermediate tyres, the waterproofs went on and off just before the start, as the weather fluctuated. I finally opted for two thin tops and lycra shorts so if it did rain, they would dry out quickly.

The race started at 6pm where 200 eager riders jostled for position before the first set of singletrack. Determined to keep my heart rate down, I slid along the ice rink of the trails. Mud and wheels were everywhere. I reached an open space just as the heavy rain descended, soaking me right through. Recognising parts of the course from last year, I realized the layout was very different. I needed to revise my gel location so I could take one approximately 15 minutes before the big climb.

Quickly changing my top after lap 1, I head out for more mud and sliding. Returning back to base after lap 2, I swap my CamelBak for my spare that has a full bladder and grab a mouthful of pasta.

The rain had stopped for laps 3 and 4 where the mud now became really congealed clogging up everything in sight. On a couple of occasions it prevented my back wheel from turning forcing me to stop and clear all the cack.

It was a real effort to go back out on the track for lap 5 knowing how hard the first 4 laps had been. I forced myself out and took a gel with caffeine to give me a mental boost. The ground became firmer and I started to feel a bit better. 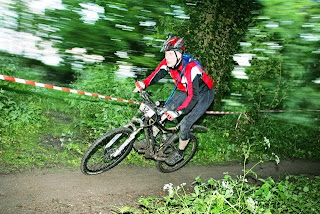 This was my first night ride for the year where I was uncertain how I would find it. With my bright Exposure lights on the bars and helmet, visibility was never an issue.
Lap 7 was fantastic! The ground was firm enough to get sufficient speed on the single track to swoop up the short inclines. Lap 8 was also good as I was really getting into the race.

Setting out on lap 9 at 3:30am, I realised that I only had time for 2 more laps. I was loving it at this stage and wanted more. Making the most of the final 2 laps I am rewarded by seeing the sun push through the small gaps in the cloud creating an awesome sight. After riding all through the night it's quite a magical feeling to see the sun rise at the start of the new day. All the pain form the night before simply disappears.

Finishing at 5:36am I am delighted to see that I achieved 9th place out of 48 other solo riders. This could have been even higher if there was a Vet category.

Posted by Richard Sterry at 12:49 No comments:

Stay Away from the Buttercups - The Book

Blogs about the Triple

Become your best self