Round & Round and Up & Down

Arriving early at the Hawley Lake Sailing Club near Camberley I prepare for the XTM Enduro that is part of the XT Festival.  The organisers All About Triathlons planned a weekend of multidiscipline events where for the first time they arranged a specific MTB race.  The race was only 4 hours attracting over 100 riders.
Setting out on a couple of practice laps, I soon realised that it was not technically challenging.  The single track sections required a bit of thought, where it could have done with a few bomb holes and technical descents to make it more interesting.  The few short sharp hills gave it an average of 120 feet of climbing per mile, which tested riders towards the end of the enduro. 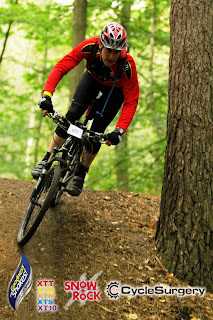 Each circuit was just 3 miles in length.  After taking a couple of breaths, I was half way round and before I knew it I was back at the start.  There were few places to get a rest or stretch the legs so the heart was pounding solidly.  Completing my first 6 laps in 17 minutes each (10.5mph), it was getting confusing to know which lap I was on.  Fortunately I had programmed my GPS to keep count of the laps so I could grab a gel on the even laps.
During the early stages I picked out the best lines and sussed out the overtaking places on the single track.  This proved useful on a number of occasions when I didn’t get a chance to overtake on the fire roads.  I was certainly overtaking many more than those who overtook me.  Unfortunately it was very difficult to work out who was riding as a pair or going solo.
As the race progressed the course thinned out and passing comments were few.  I was delighted to see bunches of riders straddled up the hills panting or pushing with their bikes.  Rising to the challenge I powered up the slopes overtaking as many as possible.
The rules stated that the winner is determined by the most number of laps.  Those who had completed that same number of laps would be judged on the speed of their last lap.  This was an interesting concept, which was confirmed when talking to the race organiser.  Normally it is the overall time that separates those with the same number of laps. 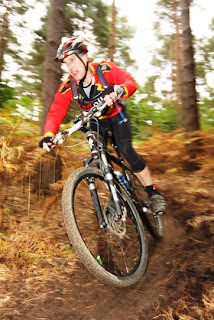 During lap 9 I realised that I could not quite squeeze in a 13th lap before the 4 hour deadline.  I therefore took laps 10 and 11 really easy and had a good stretch before I started lap 12.  Speeding round the course on my final lap, I could tell that others had similar ideas.  Overtaking several riders on the steep climbs enabled me to achieve another 17 minute lap as I reached the finish.
The results were somewhat ambiguous as the pairs and soloists were mixed together and there was no factor for the speed of the last lap.  Out of 65 soloists, I came about 21st covering nearly 40 miles.  For Goodness Shakes were handing out their drinks afterwards to kick start the recovery process.
It was a good day out where the weather was kind to us.  During September I’ve reduced my training programme towards the end of the season so I can rest properly, hence the lower race position.  Soon I will start my winter training in preparation for challenges of 2011.
Posted by Richard Sterry at 20:11 No comments:

Torq in your Sleep 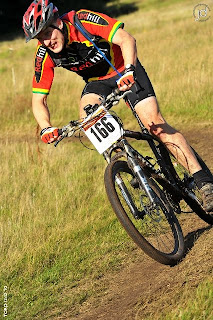 My last major race for 2010 was the Torq in your Sleep organised by Gorrick near Yateley. There was no let up in my meticulous planning for the 12 hour endurance race as detailed lists were prepared and everything was packed into the relevant boxes for the day.

Arriving at the campsite soon after 9am, we set up the gazebo and other equipment right next to the track. I say ‘we’ as I had the luxury of a dedicated support crew in the form of my daughter Lorna and her boyfriend James.

Following a quick warm up getting a feel for the course, I was ready for the start at midday. 300 riders completed a controlled lap of the arena before diving into the first section of single track. Initially it was crowded, but not too congested as I worked my way into the top third of the bunch.

The course was surprisingly dry considering the recent heavy rain during the week. The single-track sections flowed well and there were a few decent 20 foot near vertical drops to glide down, some with a steep climb out. The first 8 mile lap was completed in excellent time where it was quite an adventure not knowing what was coming next. Lap 2 enabled me to pace myself around the course whilst still maintaining a good speed.

Pulling in for a quick change of my CamelBak, I was off into lap 3. By this stage I was adopting the best lines to take on the technical sections and looked forward to my favourite part that weaved tightly between several trees.

Taking a slightly longer stop after lap 4 my average speed was 10.7mph, which is pretty fast for single-track. It was at this stage the heavens opened with a torrential downpour. I questioned my choice of summer tyres as the wheels slid all over the place on lap 5. Previously calculated lines in the dry were useless in the wet conditions, so it was back to basics to pick the safest line over the roots whilst remaining upright.

Just near the end of lap 5 my rear tyre punctured but the slime did its stuff allowing me to continue riding to reach my support crew. James did his stuff with the track pump, and then I was off into lap 6.

The rain had now stopped and there were signs that the course was drying out. I’m glad I didn’t change my tyres as they were once again rolling fast over the hardened surface. Using my new toy, James washed down my bike with a portable pressure washer. With mud free gears I headed back out onto the course. 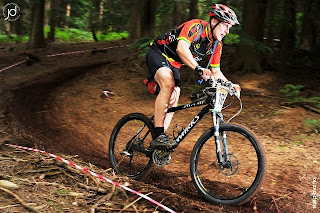 Laps 7 and 8 came and went where I still had the strength to power up the hills overtaking several riders. It is very difficult whilst out on the course to know my position in my category. At each stop Lorna gave me the low down with my position in the field and the times between myself and the riders ahead and behind me. She even gave me their rider numbers so I knew who to look out for. At one point there were 3 riders all less than 5 minutes ahead of me. This wealth of instant information provided a huge mental boost and motivation.

The lights came on for lap 9 as darkness fell. Trusting my tested lines on the technical sections I conquer the roots in the woods, although I was caught by a couple of surprises. Managing a good lap time I head straight into lap 10. It was now pitch dark everywhere and I really enjoyed owning the night with my bright lights.

Setting off into lap 11 was a real struggle. Motivation was low, my legs were tired and everything hurt. The 80 miles of technical riding had hit me hard. I then punctured again, it was the last thing that I needed. Fortunately the slime plugged the hole and a quick squirt of the gas did the trick.

Refuelling after the lap I pushed on into lap 12. Gathering all my strength I complete my final lap which seemed to take forever. Reaching the Finish for the last time, I take a well deserved rest while the support crew sorted everything out.

Out of 38 solo riders I took 8th place, which felt pretty good. It was a well organised event with around 600 participants and special thanks goes to Lorna & James for being my fantastic support crew.
Posted by Richard Sterry at 12:23 No comments:

Stay Away from the Buttercups - The Book

Blogs about the Triple

Become your best self